Let’s face it: No one likes reading dense release notes for a new feature on launch day. You just want to dig in and start using it. But you still need to learn how to use it or how a familiar feature has changed.

Sarah Taffe, senior product manager at property management software platform ResMan, and her team knew this all too well, and they wanted to make sure users both consumed their release notes and had fun doing it.

“People don’t like releases, in general, it has such a negative stigma,” Taffe said. “We wanted to find a way to make people excited about release days and give them something to look forward to.”

So they got lyrical. For one release, the ResMan team used a Pendo in-app guide to notify users of the updates, but did so in the form of song lyrics. What better way to kick it off than to the tune of “Whoomp There It Is” by Tag Team?

The guide proved popular and eventually found its way onto social media, where it drew quite a bit of attention. “At that point, we said ‘That’s our winner!’”

Since then, the team has been reworking popular songs and launching a new guide with each release, using famous tunes like Guns N’ Roses’ “Sweet Child O’ Mine,” and “Dancing in September” by Earth, Wind & Fire. The results? Feature engagement has risen between 12 and 67%.

“People associate our release notes with something happy,” Taffe said. “We were getting messages that people were dancing in their offices. It makes people think ‘That’s a company that I want to work with. They’re focused on providing joy to their customers and a little goes along way with that.’”

Here are some examples of the guides ResMan has been releasing: 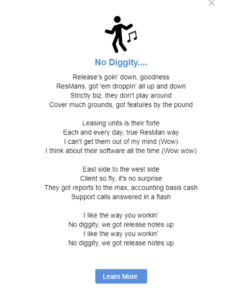 Pendo gave Boomi deeper insights into product usage and a way to act on them.