One of the hardest decisions a product manager (PM) faces is what to build and why. PM-s deal with a deluge of feature requests from new/prospective and existing customers. Often, these features are tied to customer retention but the customer might not need them immediately and could be requesting them as a long-term benefit. Therefore, it takes a lot of effort to understand the nature of the request.

Recently, the product team at Pendo had been hearing requests from customers to support guide localization i.e. the ability to develop Pendo guides in one or more languages. Before deciding to implement this feature, it was necessary to understand:

Customer research and interviews, as a traditional technique, can prove useful in fleshing out an MVP and developing a long-term roadmap for a feature. The typical approach of interviewing strategic customers face-to-face or via audio/video conference is necessary for many reasons. But this requires a lot of time and does not scale to a larger set of customers who can provide equally useful data. Other approaches like sending out an external poll/survey (via Google Forms, Typeforms, SurveyMonkey and other great tools) to the entire customer base often have low participation rates as they rely on emails; they also require dedicated time from the customer.

But with Pendo’s in-app polls, a PM can design short, effective questions that return both quantitative and qualitative feedback. Their in-app context generates higher response rates (compared to traditional methods) and minimal disruption (via dismissal with a single click).

Pendo polls can be set up to have multiple steps with rich, HTML form inputs and the polls can be targeted using the Segments feature to reach as many or as few customers as necessary.

Finally, a PM can use Pendo’s powerful in-built analytics to analyze the poll responses.

To understand more about these localization requests, I set up a multi-step poll and targeted it to all of Pendo’s existing customers who are active users (and vocal proponents) of the guide designer. Here’s what we found in the two weeks that the poll remained active: 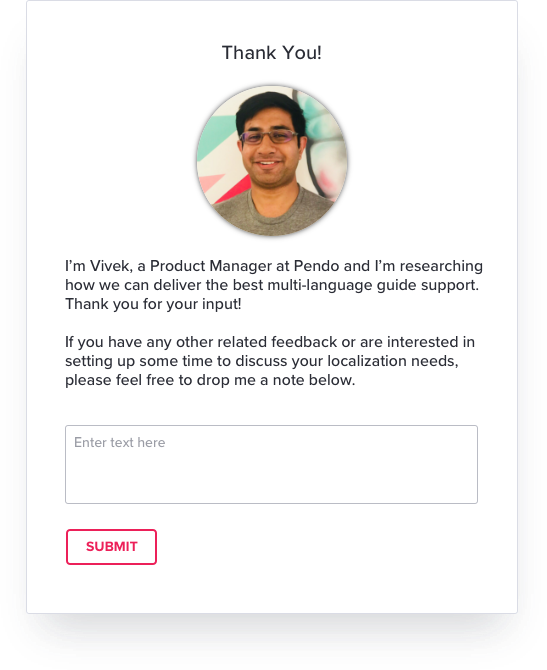 With the last optional question, customers were emphatic about specifying the importance of this feature for their websites and apps. Some described in detail how they localize their guides currently and any related pain points they have.

As a result, my team at Pendo was able to make a highly data-driven decision about what elements should be included in an MVP for guide localization. The in-app survey responses also helped us envision a long-term roadmap for this feature with more sophisticated capabilities and integrations. Some of the pain points highlighted by customers around their current methods of creating multi-language guides led the product team to prioritize smaller short-term enhancements that would help alleviate today’s challenges.

Laying out an effective feature roadmap is often facilitated by timely, effective customer research and Pendo’s in-app polls can be an invaluable tool in facilitating this process.