Problem
Just two days shy of a large, planned product launch, the Onapsis team realized they had to scale back their release to address a user experience issue. But with so little time to prepare, they needed a quick fix to pivot their strategy from a full rollout to a scaled-back beta.

Pendo'ing it
Onapsis used in-app guides (specifically badges and tooltips) in Pendo to inform their users and internal stakeholders of the beta for this critical new feature—mitigating confusion and still keeping the product team’s launch schedule on track.

Payoff
By using Pendo badges and tooltips, Onapsis was able to launch their first-ever beta and stick to their bi-weekly launch cadence. They bought themselves time, were able to gather critical data about how their users engaged with the update, and have since employed a similar strategy to incrementally roll out other features. Onapsis is a software company that provides security for business-critical applications. The Onapsis Platform includes analytics, reporting, and automation capabilities to help businesses secure their applications and act quickly on risks.

That's always the interesting thing about Pendo—you think something is going to work one way and then you look in Pendo and you're like, ‘Oh, why didn't it work? That’s not what I expected.’ And then when you think about it, it just makes so much more sense.

In the world of software, speed is the name of the game. But sometimes that speed can come at the expense of clarity—especially when you’re introducing new functionality your users aren’t familiar with. Pendo helps smooth out the edges of those hard transitions—and even makes the unfamiliar, exciting.

Just two days shy of a planned product release, the Onapsis team uncovered a potential user experience blocker in a new feature they were preparing to launch. “Our platform has four products. In one of them, we allowed users to customize a certain aspect of the product; but in the other product, you couldn’t,” said Donna Barbieri, manager of user enablement at Onapsis. “We were releasing the ability for that customization in the other product as well.” After Barbieri reviewed the new update, she realized that the product team needed to hold on their full rollout while the user experience issue was ironed out.

Barbieri worked with the product team to instead launch the feature in beta before moving into a full deployment—something Onapsis had never done before. But with only two days to go before launch, Barbieri knew she needed to find a creative messaging solution that wouldn’t hold up the release. “[I asked] how can we scale this back without delaying this release and future releases?,” said Barbieri. “How can we use Pendo to get this message across easily and move forward?”

Let the badge lead the way

Barbieri’s team tackled the problem in two ways. They already had the Resource Center enabled in the Onapsis product, so they decided to leverage it to communicate the upcoming beta launch via a news announcement. When a user clicked on the announcement, they were taken to a new “help” topic page containing more detailed release and product notes where they could learn more.

Within the product itself, the feature appeared as a new menu item. So Barbieri created a clearly visible badge to indicate that the feature was in beta. Whenever a user hovered over the badge, a tooltip would appear to explain what Onapsis’ beta program entailed, as well as a link to the additional details from the news announcement. “We’d never really done a beta like this before,” Barbieri explained. “So that was another challenge to explain what we were doing.” 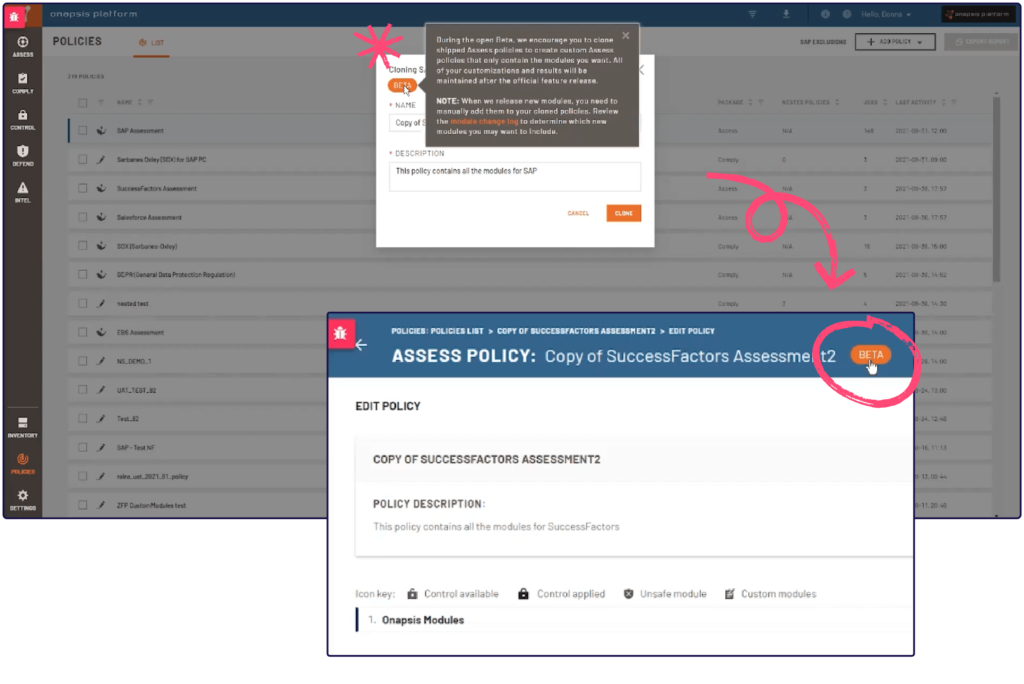 One of the biggest successes of this particular Pendo use case was how quickly Barbieri’s team was able to launch the beta badge and corresponding tooltips. “Being able to do this so last minute was a good win for us,” said Barbieri. “And also still being able to release the feature, but kind of hold it back a little. Expectation-wise this was also a good win for us from the product team.”

Since the success of their first beta badge, the Onapsis team has launched another badge to help users navigate to a new filtering feature that had been highly requested by their customers. “We had a lot of customers requesting this new filtering option,” Barbieri explained. “We knew it was going to be a big win, so we wanted to make sure it was front and center when our customers went to the page.”

Barbieri also noted that one of the biggest perks of leveraging badges in Pendo is the ability for her team to take them down themselves, without relying on additional engineering resources. She also said that the project was a huge win for Onapsis’ product team and the company’s internal communications efforts overall. “From an internal perspective, it was a big win for our product team to be able to change their release strategy last minute and still have a cohesive experience for our end users—and even for our internal teams to understand what was happening.”