Each year, the Pendo marketing team surveys hundreds of product leaders across the US and the UK in order to gain a deeper understanding of their responsibilities, priorities, and place in the organization. We then collect our findings in our annual State of Product Leadership report, publishing discrete versions for US and UK product leaders. But this year, we had a realization: Why keep those results separate? Instead of solely looking at the profiles of product leaders from different regions in isolation, why not also compare them? That’s how the idea for this guide was born.

Our goal with this guide isn’t to declare that one type of product manager is superior to another. Instead, we want to highlight how product management styles differ by region and identify areas where product managers from different regions can learn from one another. Regardless of the coast or country you call home, we hope this guide will provide you with a broader perspective of what it means to be a product leader.

To the untrained eye, the role of product manager may seem uniform and universal — especially for those working in B2B and SaaS. Whether you’re in the metropolitan areas surrounding San Francisco, Boston, or London, if you’re a product manager at a software company, your job is pretty much going to be the same, right?

The product manager role is full of nuance, and as you’re about to discover, there’s plenty of variation based on where you are on the map.

For beer aficionados, you can find a parallel in the different styles of India pale ales, or IPAs: There are West Coast IPAs, New England IPAs, and English IPAs, all of which offer something a little bit different in terms of flavor. But on balance, they’re more similar than they are different.

That’s one of the biggest takeaways from our analysis. While West Coast, East Coast, and UK product managers all have distinct profiles, there’s more connecting them than separating them. Here’s a high-level look at what those three product manager profiles look like: 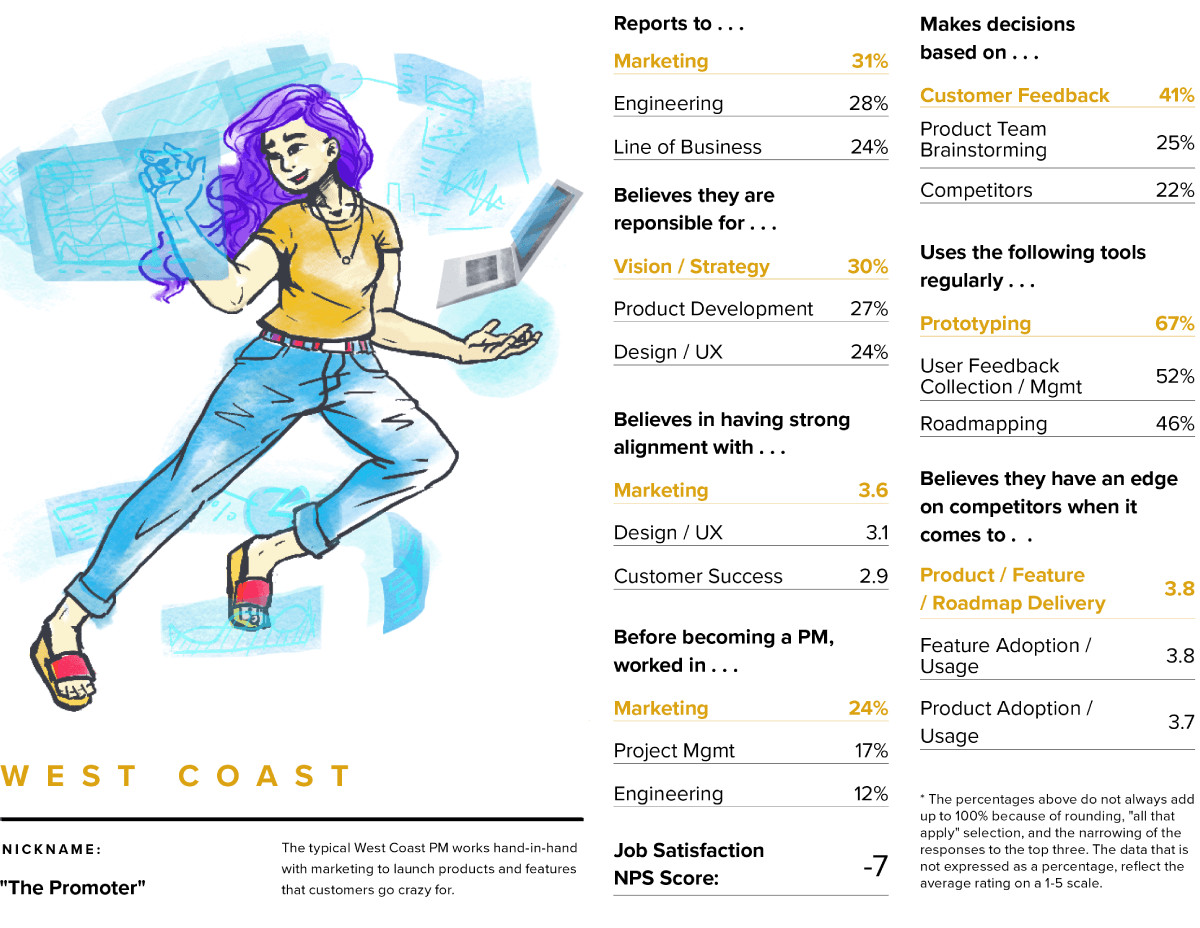 Perhaps not surprisingly, product managers from the East Coast and West Coast of the US tend to have more in common with each other than with their UK counterparts, who, overall, have a much stronger focus on revenue and business success. This makes sense, of course, when you consider that UK product managers are more likely to report to individual lines of business.

Both lean heaviest on customer feedback during the decisionmaking process, whereas East Coast product managers are more likely to rely on internal feedback and the opinions of their teammates.

Keep reading for a more in-depth analysis of the key differences and similarities between West Coast, East Coast, and UK product managers.

Please fill out the form below to read the rest of this e-book. Over the past several years, there’s been a growing trend of product teams gaining more influence and independence within organizations. Increasingly, product leaders are earning a seat at the executives’ table, and the role of chief product officer (CPO) is becoming more common. However, it’s also clear that this increase in product’s influence is catching on more quickly in some locations than in others.

When we look across the pond, the plot thickens: UK product managers are most likely to report to an individual line of business (41%). The next closest is marketing (26%), followed by a dedicated product team with 22%.

Did You Know: Product managers in the UK are more likely to report to an individual line of business compared to East Coast and West Coast product managers.

Unlike their American counterparts, UK product managers believe that having strong alignment with business operations is the most important — which makes a lot of sense when you consider that most UK product managers report to an individual line of business (as you learned earlier).

For UK product managers, aligning with business operations is most important.

How do product managers decide which products and features they’re going to develop or prioritize? For many, the answer probably seems obvious: Ask your users and customers. After all, in order to create a product-led organization, you need to regularly communicate with and gather feedback from those closest to your product — the people using it day in, day out. And while customer feedback certainly plays a role in decisionmaking for all three of the product manager profiles we’re studying, the data reveals that some value it more than others. West Coast product managers are most likely to get their best ideas from customer feedback, but those on the East Coast and in the UK turn to their own product team.

West Coast product managers, for example, are most likely to source their best ideas from customer feedback (41%). Their second most popular source of ideas is product team brainstorming (25%), followed by competitors (22%) and internal suggestions (12%). It’s a fairly balanced approach, but there’s no denying that customers come first.

East Coast product managers have a balanced approach as well, only their prioritization is reversed: They’re most likely to source their best ideas from the product team (36%), with customer feedback taking a backseat (28%). And while West Coast product managers value competitors over internal suggestions, East Coasters once again do the opposite, with 19% sourcing ideas from internal suggestions and 17% sourcing ideas from competitors.

Interestingly, UK product managers rely more heavily on product team brainstorming (44%) and customer feedback (43%) than either East Coasters or West Coasters. And as you can see by the percentages, they prioritize both nearly equally. That being said, the reason why the math works out the way it does is because UK product managers rely a lot less on competitors and internal suggestions, with just 9% sourcing their best ideas from the former and a mere 4% sourcing their best ideas from the latter

When we broke down the results by region, one finding became immediately apparent: On average, UK product managers believe they are much more effective than do their American counterparts. When we take a more granular view of the data, it’s worth noting that each product manager profile ended up with a different “number one.” UK product managers ranked themselves top in product adoption/usage, which aligns with what we already know about them:

They’re focused on business results, and thus want to make sure that people are adopting and using the product they’re responsible for (and that it’s driving revenue). Meanwhile, West Coast product managers, who have a strong relationship with marketing, believe they’re most effective at product/feature/ roadmap delivery. For them, working with the marketing team to coordinate successful product and feature launches is crucial. Finally, East Coast product managers gave themselves the highest score in the feature adoption/usage category, which supports the notion that East Coasters care more about internal measurement (i.e. are people actually using the features we’re launching?) as opposed to external promotion.

If you were under the impression that product managers in different regions feel pretty much the same way about their jobs, it’s time to revisit that assumption. True, West Coast and East Coast product managers feel pretty similarly about the role of product managers … and their feelings aren’t particularly good. Both groups gave the role a Net Promoter Score (NPS) that’s below zero, which, in the world of NPS, as you likely already know, is not good (to put it lightly). On average, East Coasters gave the role an NPS of -13, while West Coasters gave it a slightly less harsh -7.

Product managers in the UK have higher job satisfaction than those in the US.

In the UK, it’s an entirely different story, with product managers there giving the role an average NPS of 43. There’s a massive difference in job satisfaction on either side of the pond. So how do we account for it? Why are UK product managers so much happier with what they’re doing, even though they’re basically doing the same thing?

One explanation: UK workers might just be happier overall. Compared to US workers, workers in the UK have better job security, more vacation time, and, in general, more robust employee benefits. Another potential explanation: Because UK product managers are laser-focused on business results and revenue, it’s easier for them to measure success and to see the positive effects of their work. As a result, they end up feeling more satisfied with their jobs. Overall, product managers tend to have similar career paths, regardless of whether they’re on the West Coast, East Coast, or in the UK. Specifically, when we look at what roles people worked in before moving into product management, the two most common ones that emerge are marketing and project management.

Of all the aspects of the product manager role we surveyed, functional responsibilities are most common across geography. On the West Coast, East Coast, and in the UK, product managers see their number one responsibility as product vision and strategy. What’s more, all three groups rated product development in their top three. 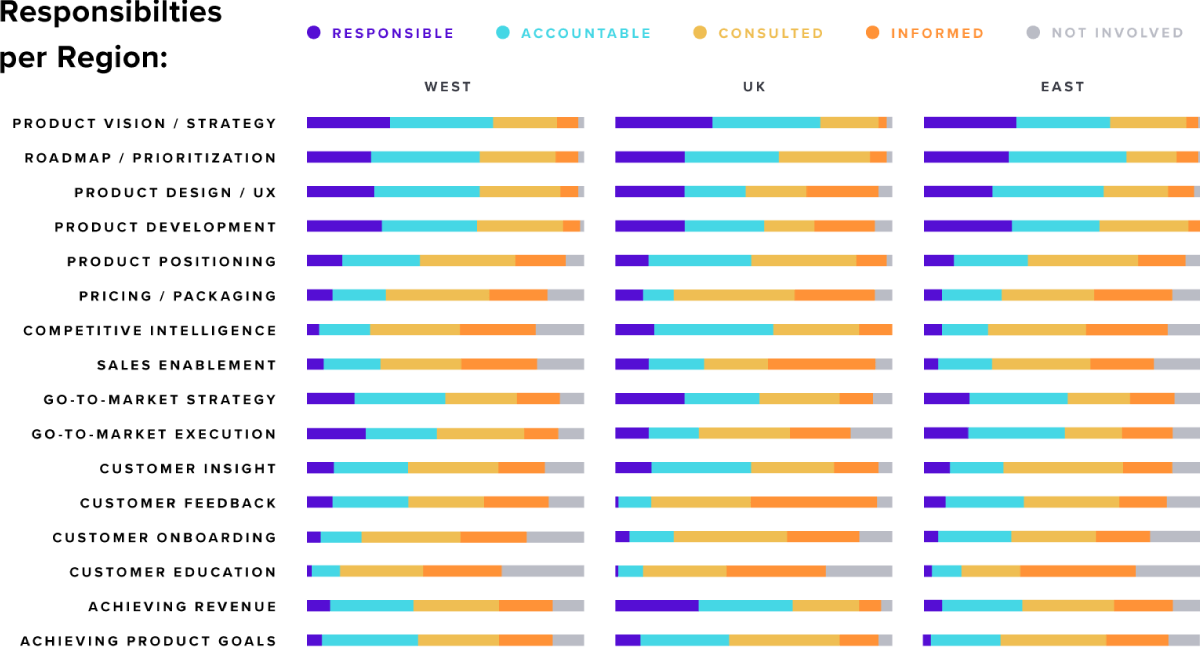 UK product managers prioritize achieving revenue more than those in both coasts of the US combined.

Tools of the Trade

For East Coast and West Coast product managers, tool usage patterns are nearly identical. Specifically, both groups have the same top three tools (and they’re even in the same order):

When we bring UK product managers into the equation, however, the pattern shifts.

Turns out, UK product managers are more likely to use experimentation tools, like feature flagging and a/b testing tools, as well as product analytics software. This makes sense given that UK product managers are more business-driven than their American counterparts; they’re constantly searching for ways to increase usage (and grow revenue) and use analytics software to measure the outcomes of their experiments. However, there is one tool that binds all three product manager profiles together: roadmapping. In terms of regular usage, roadmapping tools are the second most popular tools among UK product managers (with 42% using them), and, as you saw earlier, they’re the third most popular tools among West Coasters and East Coasters (with 46% and 38% using them respectively).

So even though East Coast product managers were the only group to have roadmap/prioritization among their top three responsibilities (as you saw in the previous section), it’s clear that all product managers, regardless of location, view roadmapping tools as essential to the role.

We hope this guide helped broaden your perspective of what it means to be a product manager. Remember: As product teams continue to gain more influence, it’ll be up to product leaders — like you — to innovate and to steer everyone within your organization toward adopting a more product-led approach.

At the end of the day, if you only study and learn from product managers in the region you live in, you could be missing out on some potentially game-changing insights.

P.S. Looking to take your product management game to the next level? Learn how Pendo can help you better understand and guide your users so you can create product experiences they can’t live without.

Complete the form to continue reading